The Bone Broth Hype – Is It Worth It? 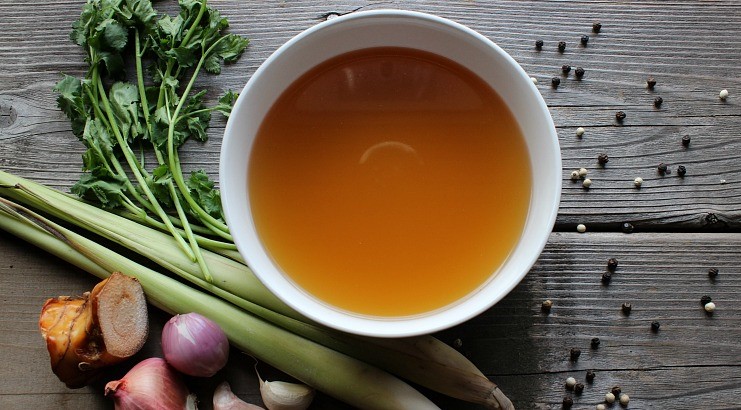 I’m sure you’ve seen a “new” product around, possibly in magazine ads or in the health food stores. It’s something called “bone broth” and it’s being marketed as the next new superfood. It’s purported to be a panacea for your joints, skin, sleep, immune system, gut, and more. Are all the claims too good to be true, though?

First, what is bone broth, exactly? It can look like any other broth or stock, so it’s hard to tell at first glance. Here are the technical culinary differences:

Broth: Water, simmered with veggies, meat, possibly some aromatics, and potentially some bones. It’s cooked for a relatively short time (usually no more than 2 hours), then strained and seasoned. It’s a light, flavorful liquid that stays fluid when chilled.

Stock: Water, simmered with veggies, aromatics, and animal bones, sometimes roasted, and sometimes with some meat still attached. It is cooked for a medium period of time (usually 4 to 6 hours) then strained. Stock usually has a thick, gelatinous quality. When chilled, good stock should have the texture and jiggle of Jell-O. Stock is not served on its own; rather, it’s used to deglaze a pan, or as a base for a rich sauce or gravy.

Bone Broth: Made from roasted bones, but there can sometimes be some meat still attached, and usually something acidic, like a bit of vinegar. It is cooked for a long period of time (often more than 24 hours) and the goal is not only to extract the gelatin from the bones, but also minerals and other nutrients. It is then strained and seasoned to be enjoyed on its own, like broth.

Vegetable broth/stock: These two liquids are essentially the same thing, since no bones are incorporated in the process.

Store-bought broth/stock: When buying shelf-stable cartons or cans at the store, there is no real difference between what is labeled broth vs. stock. No matter which one you choose, I always recommend buying low-sodium versions.

One other big difference is price. You’re likely to be able to get a can of broth or stock at the store for a dollar or two, but true bone broth can set you back as much as $10 for 16 ounces!

Some of the larger manufacturers are coming out with bone broth in addition to their regular broth lines. Check the nutrition label to make sure that it’s truly bone broth – it should have significantly more protein content than their regular broth. As with any store-bought broth or stock, check the sodium content, too.

Now that we know what makes bone broth different from “regular” broth or stock, let’s find out if it lives up to the claims that some manufacturers are stating.

Nutrition: bone broth does contain more protein, as well as nutrients that aren’t required to be on the label, like collagen, glucosamine, and chondroitin. There are claims that bone broth has calcium, magnesium, phosphorus, etc, and while it’s true that bone broth contains more of these nutrients than traditional broth, the amounts are still too low to be of any meaningful use.

Better Sleep: Bone broth is purported to help with both quality of sleep and helping you feel less fatigued if you aren’t getting enough sleep. It’s the amino acid glycine that present that is being credited for these benefits. Some studies have shown that glycine can help with both sleep quality and reducing fatigue. Unfortunately, since there’s no standard bone broth recipe, it’s hard to pinpoint exactly how much glycine might be present, though there likely is some.

Protect Your Joints: It has been said that the glucosamine and chondroitin sulfate present can help reduce joint pain or even prevent osteoarthritis. While there have been studies that show those compounds can positively affect the symptoms of joint pain, there is no way to know how much might be present in any particular bone broth. Just like with glycine, it’s likely to be there, but we just don’t know how much.

Look Younger: Another claim is that bone broth contains collagen; collagen is a key component of our skin; ergo bone broth will improve your skin texture and make you appear younger. There have been just a few studies on the consumption of collagen and skin texture improvement, but initial results are positive. However, those studies are on specific products, not bone broth.

Heal and Seal Your Gut: One more claim relating to collagen and glycine together is that sufferers of leaky gut syndrome (porous intestinal lining that can cause a host of unpleasant symptoms) can experience relief. There is theory behind such claims, but I was not able to find a single study that would back it up in actuality.

To sum up, there is some potential for bone broth to be useful for a few specific issues. However, I’m of the opinion that studies need to be done of the specific efficacy of bone broth before I would even consider recommending it, specifically. In the meantime, there certainly doesn’t seem to be any downside to consuming bone broth, so if you enjoy it, and can afford it (or make it yourself), go ahead! You’re more likely to see significant health benefits by eating a varied, whole-food, mostly plant-based diet, though.