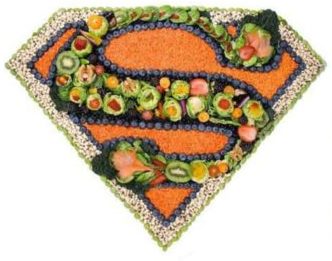 There’s no such thing as a superfood.

Don’t agree? Allow me to explain.

There’s no definition that has any way to categorically prove if a food is or isn’t super. The closest we’ve gotten to measure a food’s super-ness is the CDC’s review of nutrient density. 47 foods (yes, only 47) were ranked, in order of how much of 8 vitamins and minerals they contained (yes, only 8) in 100 calories. Interestingly, watercress scored highest. Also interesting, romaine lettuce, often overlooked nowadays, scored higher than kale, an often claimed superfood. Blueberries didn’t even make the cut!

That’s one problem with “superfoods”. When some foods get labelled super, that means that other foods that are totally awesome are forgotten. Until they make their way back onto the superfoods list, that is; it seems to change every few years.

We’re all unique. What makes a food super to you might not mean much, and can even potentially cause health issues to others. If you’re iron anemic, then beans, cooked dark leafy greens and some dried fruits might be considered super to you. But if you’re diabetic, those dried fruits are potentially dangerous. If you have hypothyroidism, then some of those dark leafy greens could cause you problems.

Plus, it’s absolutely a marketing gimmick. With no regulation of the word or phrase “superfood”, anyone can use it for any reason, and charge out the wazoo for it too. It seems like every other month there’s a new seed or berry from somewhere far away that’s being touted as the next superfood. If you like to try new things and have some spare cash, go ahead. If not, don’t worry, you aren’t missing out. Really.

A common goal I hear is to make healthier choices regarding food. If that’s something you’re interested in doing, I’m here to make it as simple as possible. So disregard the superfood nonsense! It’s just noise that’s preventing people from hearing the truly important message regarding eating healthy: Eat more, and a wider variety of, plants; as minimally processed as possible, in reasonable serving sizes.

Still don’t feel like you know where to start? I’m here to help! I can provide you with a customized meal plan, good for 4-weeks, along with four 10-minute counseling sessions, all for $75. You’ll learn proper portion sizes, balanced nutrition, how often to eat and how much water to drink, all without unusual, expensive, hard to find fad food items! Shopping lists are included, there’s no weighing or complicated measuring of foods, and everything is quick and easy to assemble or make. Contact me today to get started – due to the amount of time these plans take me, I can only offer a limited number each month.